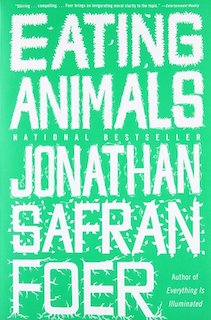 For the last four years I have been making the very slow transition to not eat animals for many reasons. When people ask me why I’m vegan, I find myself wishing I had a more structured answer. My lack of structure around the answer inspired me to read the book “Eating Animals” by Jonathan Safran Foer which has a ton of information on factory farming. I am writing this piece as a personal reflection on my choices, a book review, and informational resources.

My food journey the last few years has led me to question where the food I eat comes from, how it is treated before it gets to my plate and what organizations I am supporting with my dollars. Growing up on my grandmother’s farm, we typically killed the chickens we wanted to eat (I vividly remember the smell of burned feathers as my grandmother put them in a boiling pot of water after breaking their necks) and drank milk from the cows on her farm (the cows were so massive I was too scared to interact with them). For most of my childhood, this is how I consumed my animal products—straight from my backyard. Moving to the United States meant that I no longer knew where my food was coming from. It seemed strange that there was milk during every single school meal and that people ate so much meat (Did they not know how expensive it was? How long it took to raise a chicken? How special the occasion was to kill an animal?) but I assumed this was part of the culture shock of moving to a new country. For the next few years, I ate mostly chicken and fish and had a very short attempt at being vegetarian in high school.

In 2016, I spent 3 months living in South India for an internship through my university. South Indian cuisine is mostly vegetarian,and there is the distinction between veg and non veg restaurants and food on all labels (see below). My intern pals at the time were also vegetarian and so I took this summer as an opportunity to try vegetarianism again. When I came back to the United States to start my final year of university I decided to stop buying meat and only cook fish and tofu, still eating meat when I ate out. Every year since I tested how much I was comfortable giving up, with In-N-Out and fish sushi being the last to go. Over the last year, I have tried taking out greek yogurt and eggs and substituting with equally tasty and nutritious things like chia pudding and chickpeas. Taking it one step at a time made me feel like I was working towards something and not having to sacrifice too much at once.

For me, not eating animals has not felt like a huge sacrifice because it has been so gradual. The incremental sacrifices have made the transition a lot easier than giving all animal products up all once. The more I learn about how we get our food, the more I realize that I have a choice in what values I support. So why am I vegan? I see my choice to be vegan as a move to stand for what I believe in: ecological conservation, humane treatment of living beings (both animals and humans), and removing financial support from corporations who are disinterested in the effect they have on the world outside of their bottom line.

Foer’s book is incredibly helpful in understanding the environmental, animal welfare and cultural aspects of eating animals. He spent a few years gathering information to write the book and wraps it beautifully with family and cultural context. When Foer’s first son is born he wonders how he will explain to his son why it is okay to eat other animals but not their dog. This leads him to investigate factory farms in the United States and dive into where our animal products come from. This was no easy feat, as he discusses at length how massively difficult it is to get in contact with any of the big meat producers in the country due to so-called “Ag-Gag” laws that prevent consumers from gathering data on intensive animal agriculture operations. As I was reading the book, I highlighted a few statistics that really stood out to me. I’ve organized them below into environmental, human and animal welfare/conservation impacts.

1. I can’t go all in! I can’t commit to giving up so much, what should I do? And will my choice really make a difference?

2. Why vegan and not just vegetarian?

3. How will I get all the protein I need?Is a vegan diet healthy?

4. Food is such a big part of my culture, there is no way I could stop eating my family’s delicious meat dishes.

5. Aren’t there bigger problems to worry about, like protecting humans and fighting racism, sexism and xenophobia?

6. Being vegan is expensive, inaccessible and a very privileged thing. I don’t want to contribute to more inequality

7. It’s complicated! How do I know which food has less impact?

8. What are some other resources you would recommend?

So What Does All of This Mean?

Well here’s the thing: there is a delicate balance between our own comfort + satisfaction and cruelty + ecological destruction. This choice is often harder than it should be to make. We have to think about how our choices will affect our lives, how hard it will be to sacrifice our current state for some desirable future state that may not even occur. But think about this: billions of dollars in government funds (read: taxpayer dollars aka your money) marked for agriculture are used to subsidize massive corporations whose incentives are to maximize profitability and shareholder value. These are the same corporations that are polluting our earth, abusing animals, exploiting immigrants and giving you antibiotics-stuffed animals that create lakes of shit. So where can you start?